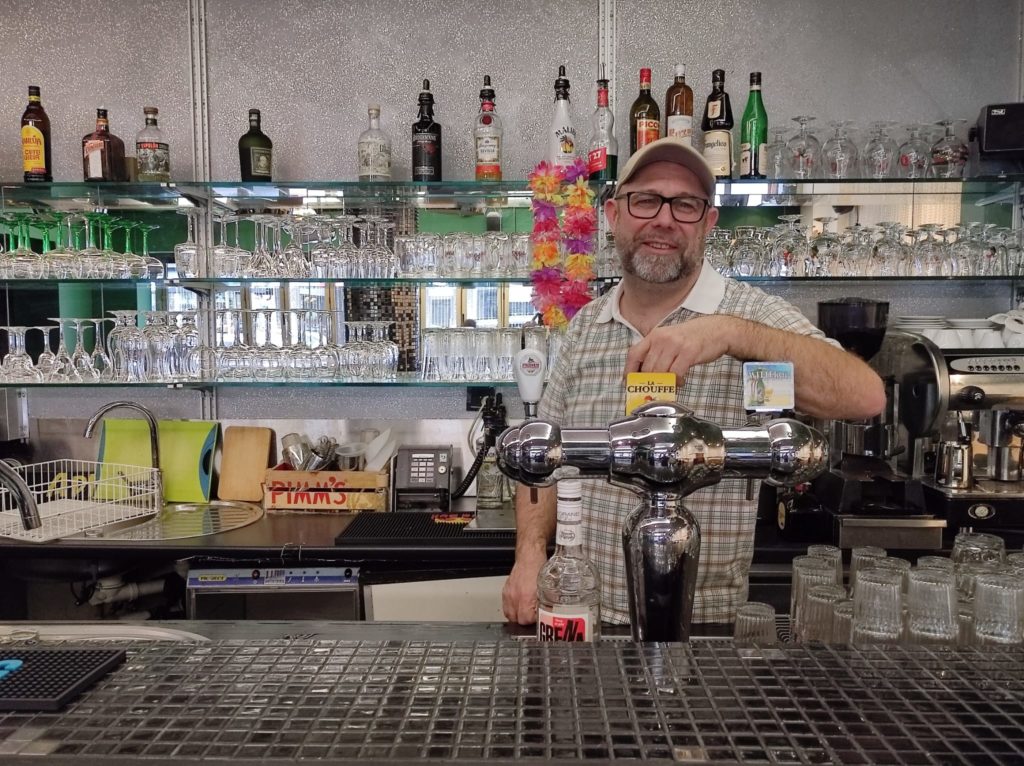 Adrien has been a client for 10 years and told us about his experience with Drinkotec.

Can you introduce yourself and Fenomeno in a few words?

The Fenomeno bar is a lounge bar with a dance floor that does a little catering. We’ve been here for 13 years, we mainly do cocktails, strong spirits, beers and in catering we do little things to eat, to share, a concept around the mozzarella bar.

What is your position in the company?

I am the manager, the boss, the operator, the creator.

What are the difficulties inherent in running an establishment like yours?

The hardest thing is the hours, you have to know that your life will be spent in your establishment.

Often people think that you arrive, you open the door, you serve beers, but no, there are all the logistics behind it. For example, we have the whole DJ part, then there’s the purchases, then there’s the accounting, then there’s everything that goes wrong: the fridges, the maintenance, the cleaning. There is a lot.

How did you hear about Drinkotec?

Honestly, I don’t remember, I don’t know how Drinkotec came to me.

But it’s true that we had a lot of flow and we didn’t necessarily manage to control the pouring well, we were doing statistics, we were doing inventory management, in relation to sold and unsold products. And that took a lot of time.

We had a rather important rotation of bartenders, in these establishments of the bar style or that it overflows, often we have temporary workers and turnover of personnel. We try to work in confidence, it’s always good, it’s not because we have that that we can’t work in confidence, but it allows us to manage the flow much better.

There is something that makes us freer, we have less control to do, the control is done by itself and at the end of the evening we see everything. Whereas if you have a flow and you do stock management, it’s: “I bought 15 bottles, that amount of drinks were served, I have this number of bottles left, it’s 15 drinks per bottle”, you are there with your Excel tables, your calculations of apothecaries, it’s complicated.

For bars like Fenomeno, which had a lot of flow, where you have 4 to 5 bartenders behind the bar, we thought we’d take the plunge.

How long have you been a client at Drinkotec?

The bar has been open for 13 years, but we started [with Drinkotec] in the third year, so it’s been 10 years.

How did you choose the equipment?

I was shown how it was made, how it worked, with the cap system and so on.

It’s true that at the beginning I didn’t like the cap system because it’s a bit strange to have these bottles with those caps, the customers ask what it is and we explain.

The customer likes it when you always pour a little bit above the line, they like it when you give them a taste of something and so on. And they have the feeling that, when there is a system flow, the boss is a bit stingy and doesn’t want to give.

It’s true that these system debits are seen more in nightclubs than in bars, so it’s weird for people, but we were a kind of mini-club at the time and, on these machines, there are always keys that allow you to give a taste for example.

Either the owner has the keys, or a bar manager and it allows to taste and also to pour a little more.

The good thing is that there is a great control on it and it leaves the same freedom of service as if you don’t have the system.

How did you work before Drinkotec installed the two flexitouch?

Everything was “open” with a cocktails doser.

Did the installations meet your expectations?

A 100%! It was totally in line with what was presented to me.

In terms of management, in your business, how did it help you?

The employee, knowing that the offered drinks are counted, cannot offer without saying anything, he is obliged to register it to offer.

Instead of offering 15 or 20 rums in the evening when his buddies are there to be treated by him, he will say “guys I’ll make you a round but not two”.

Are all your bottles controlled?

All strong spirits, not beer and not wine.

Have you seen an evolution, a change from the moment the system was installed?

There were the cocktails. It’s true that at the beginning we were mostly into whisky-coca, rum etc. Very few cocktails. We then had, to follow the cocktail trend, a more developed drink menu and we just had to make a programming so that, when we register the cocktail, the good portions on the good products are selected.

And that’s great, because as the doses are respected, each bartender does the same thing! Even someone who doesn’t know what to do, he has his book, he knows the alcohols he has to pour, he has the portions, he shakes, his cocktail is as good as the one of the bartender who has 20 years of experience.

If a customer wants a Long Island Ice Tea, there are 4 alcohols in it, and he asks for 2 times the Vodka and no Gin, we could be annoyed but once again we use the keys, we unlock 2 portions of Vodka.

But these are just little specifics.

And in the end, there were evenings where there were so many people that we didn’t have time to change the caps, so we opened everything and we poured freely. But these are decisions that we can make as a manager.

It shows the openness of the system, the goal is that people can decide to be in free or in control.

Yes, absolutely. Not all of my bartenders have worked this way, those who haven’t worked in clubs are often a little surprised. And some of them thought that it slowed down the service a little bit. It’s nice to be able to switch.

Precisely, what was the impact on the teams? How long did it take to get comfortable with the equipment?

It goes very quickly, the only thing is when there were many people. I only have two stations, if I had 4 stations with 4 bartenders, it would have been fine, but with 2 stations and a lot of people, if the stations are busy and a bartender waits, to be able to take the bottle, for one of the two stations to be free… But that’s where you have to learn how to work afresh: Did you cash the customer? if not, you cash while waiting for the station to be free. The employees have to think differently.

It doesn’t drastically impact the teams and the way they work, they just need to have different reflexes.

How much do you think this system helped you to save?

But what I can say clearly is that the staff is offering less.

It’s normal to offer, I’m not going to bully employees who bring me people, their buddies who come to consume. I just want to know if they offer them drinks all evening or if they offer when they have spent.

I see that my barman made 2500 francs (Swiss Francs) in the evening, if he made 150 francs of free drinks it’s OK. It’s 10 drinks, 10 strong alcohols, so if he offered 10 drinks but made 2500 francs in revenue, it’s OK! It’s just that you have to be careful who you offer it to. To someone who has already spent 100 francs, you can give him a small shot of acohol.

I can’t QUANTIFY how much I’ve saved, but what I can say is that I HAVE saved.

I did less pouring, that’s for sure. Without bullying my teams.

If the employee is not happy, it’s because he wants to offer too much to his friends and he has no place in my establishment.

How is your cooperation with Drinkotec?

I haven’t had much contact with you, but always nice people, great team, on the phone too.

Really 100% happy, I have nothing to complain about.

Earlier we were talking about the maintenance work you had to do on your equipment.

There was only one failure in 10 years, nothing really, just attrition. It was changed quickly. From time to time I have to change the caps.

But otherwise, every time a technician has come, it’s been for configurations in relation to my products. But it’s not every time.

I buy products, I test them, I check them performances. When I have 5, 6 or 7 products that are good and I know that I will keep them for a while, at that moment I call and he configures all the products at the same time.

Yes, without any worries in the bars, for the quality of the service and for the efficiency of the product.

IN NEED FOR SOME TIPS?

Leave us your coordinates and we’ll call you back as soon as possible!